Richard Chimwendo Banda to give back impounded motorcycle 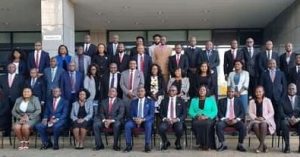 Three top members of the Human Rights Defenders Coalition are among 40 newly appointed Deputy High Commissioners, Ambassadors and other diplomats.

The three are Luke Tembo, Billy Mayaya and MacDonald Sembereka

The appointment of the 40 comes in the wake of a recent diplomatic scandal in South Africa where officials at Malawian Embassy are alleged to have been part of a cartel that was buying alcohol using their diplomatic privilege and selling it.

In an interview with MIJ Online Sembereka insisted that their appointment does not mean that activism has ended saying they are now part of systems meant to further other human rights.

Sembereka is slated to pick up a role at the United Nations in New York.

He has since downplayed opinions which are rife in the social media domain that their appointment is meant to silence him from providing checks and balances and a way of thanking him over the grouping’s role in challenging the previous government.

Speaking during an Orientation under the theme ” Development Diplomacy: a Catalyst for Sustainable Development”, Eisenhower Mkaka, Foreign Affairs Minister challenged the diplomats to propel positive relations with other nations.